My father died in 1992 at the age of 71. He was a wonderful Christian, husband, and father . . .  in that order.  To the best of his ability he tried to understand the teachings of Jesus and to live his life accordingly.

I was my father’s greatest disappointment.

It’s not that I’m not a Christian – I am.  It’s just that as a little child I had questions that I knew I wasn’t suppose to ask.  So I didn’t.  On the rare occasion that I was able to muster the courage to ask, I was usually told that some things we had to “take on faith” . . .  or that those answers are in God’s hands. Some of those same questions resulted in my leaving Evangelical Christianity in 1982.

As a result, when my father died – when I was 47 years old – my questions remained unanswered . . . because I had never asked.

After he died I did, however, make a list. I called that list “Conversations with my dad.”  It’s basically just a list of questions and the imaginary conversations I wish we could have had.

I revisited that list today.  It’s actually not all that long – but the questions have still not been answered. Even though I am close to many Evangelical Christians, I still don’t feel like I can ask them.

My father called himself a “Fundamental, Evangelical Christian.”  I’m not sure when Evangelicals stopped describing themselves that way, but my guess is it was when the results of Muslim Fundamentalism became obvious on September 11, 2001.   Even so, every Evangelical church insists that the entire Bible MUST be interpreted literally.

I won’t even begin to go into what that must continue to do to little children who, like me, have questions. I don’t think they are any longer given lists of acceptable questions and made to memorize Bible verses out of context as the acceptable answers. My guess is that, like me, they just know what they can talk about and what they can’t.

The reason I started writing this post is because I just finished listening to the House of Representatives debate whether or not to impeach Donald Trump.  They voted yes … and now history is going to unfold around that decision. As I listened, I felt like the two “sides” were living on two different planets rather than just on two different sides of an aisle.

Almost 20 years after his death I have come to understand my father. His convictions served him well during his lifetime, and his legacy has lived on in the hundreds – if not thousands – of people who benefited from his Christ-like example.  He followed Jesus – and even left a church he loved over an issue that was never explained to me, but that involved the dismissal of a choir director.

My father believed that God = Love.  Where there is Love there is God. I truly believe that my dad would be heart-broken today.

I saw a very large, yellow sign proclaiming “JESUS SAVES” in the front of the mob that overran the Capitol of the United States one week ago today.

I have started a new list:  “Conversations I hope to have with my Evangelical family an/or friends.” 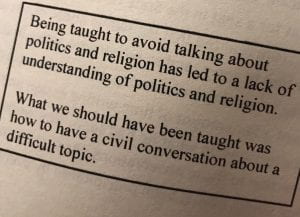 4 Responses to Can we talk?