They say that every ending is a new beginning.  I’m not sure if “they” really say that … but it’s a thought that has occurred to me a great many times over the years.

The first time was in 1986 when my kids and I were on our way to a family reunion in Canada. That was long before any of us had heard of MP3’s, iPods, or even CD’s, so we kept ourselves entertained by taking turns choosing cassette tapes. Our favorite was Jimmy Buffet’s “Last Mango in Paris.”  Paul, Shannon and I knew all the words and passed the time by singing along.

I’m in this mood this morning because Paul took me on a tour the Facebook Headquarters in Menlo Park yesterday.  Within the first few minutes I realized that my dream for Leadership 2020 has come true – and that an important chapter of my life has come to an end.  It was a moment that I want to capture and remember forever.

I’ll tell you about that moment later, but first I have to bring you up to speed…

Paul met me in Lobby 4 of Building 20 after I left my car with the (free) valet. The first thing I noticed about the building is that it looked like it was not really finished. Even the enormous wall behind the plywood staircase looked as if they were just testing colors and had never decided which one to use. 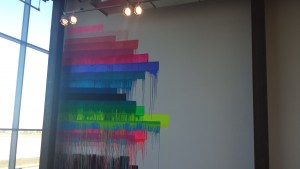 Moving right along, he pointed to the place where we were standing on the enormous model of Building 20. (I’m probably going to overuse the word “enormous” as I write about this .. but that might be unavoidable…) 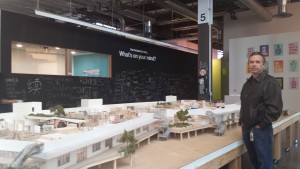 (Notice the small posters on the wall behind Paul. They are pages from an amazing book by Susan O’Malley called Advice from my 80-year-old Self . It’s  a particularly special book for Paul and Debbie – but that’s a story for later. Click on the title to buy or download … )

What the model does not show is the 9-acre roof garden.  When I was inside the building it almost felt like being outside because of the enormous skylights. 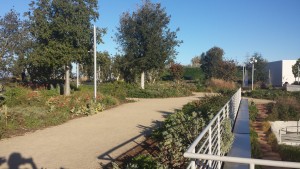 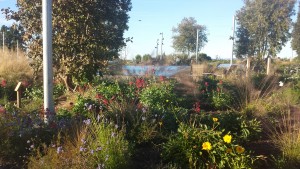 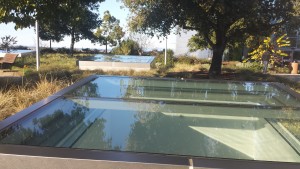 I might not get back to the roof in this post so here’s a picture of Paul that reminded me of his kids playing in Kids Town in Brookings when they were little . . . 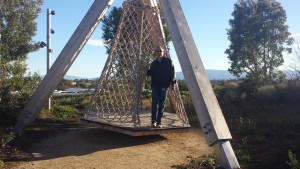 . . . and the rooftop restaurant that serves only Grilled Cheese! 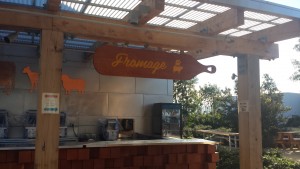 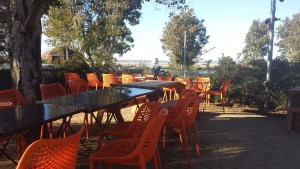 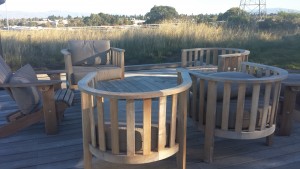 Paul told me that between this building and 1 Hacker Way there are 12 restaurants, that serve 30,000 meals a day … for free.

Most of the restaurants are located on Hacker Way …  which reminded me a lot of Main Street at Disneyland. It’s across the Bayfront Expressway from Facebook Way and there’s a great view of it from the roof. 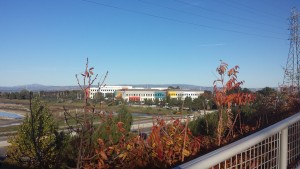 Another view from the roof was of the enormous property next door that Is being excavated for the next phase. 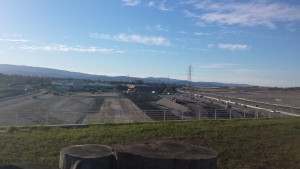 We used the handicapped access to the roof … and I couldn’t help but snap a picture of the sign … which says a lot in itself 🙂  ! 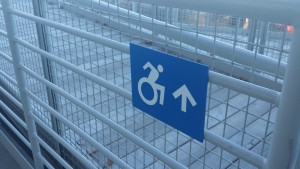 Back inside, we approached the large buffet style restaurant. The first thing I noticed was one enormous wall covered entirely with red, orange and yellow plastic tableware. At first I thought it was a piece of modern art just arranged randomly. It wasn’t until I turned around after passing it that I noticed it was the name of the restaurant: 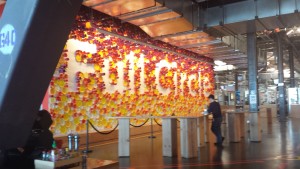 Instead trying to mention all the other restaurants, it would just be easier for you to check them out here: Restaurants at Facebook.

Paul and I were in a bit of a hurry because we were trying to get back to Facebook Way hoping to catch a glimpse of the cast of the new Star Wars movie.  I never found out exactly what they were doing because we arrived to find them tearing down the stage in the room where they had been … 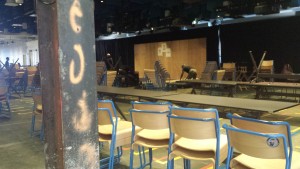 The only place we stopped on our way back was at a frozen yogurt shop. The pastries looked amazing – but we resisted.  I asked Paul why no one looked like they were gaining weight, and he told me about the first “Facebook 15.”  I guess that with all the walking, and the fact that most of the people I saw working were standing at adjustable computer desks – not to mention the walk or bike ride to  Hacker Way and the full service gym … most of them lose their “FB 15” pretty easily. 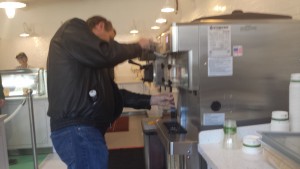 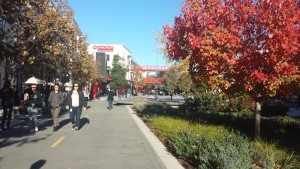 Oh yes … I forgot to mention the free bicycles.  When I left my car in the parking garage I noticed the rows of cute blue bicycles that I assumed employees could rent when they got tired of walking or didn’t have time.  That’s the first time was wrong.  Also free. 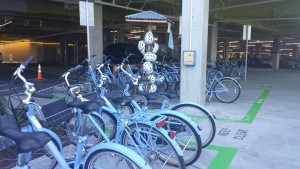 I’m still getting to “the moment” – the one when I realized I was finished with Leadership 2020 and ready to shift my focus to Leadership 2040.

Everywhere I looked I saw examples of how this 21st-Century business leader encourages creativity and supports “the whole employee” – just as we should be doing for “the whole child” in our schools.  One example is the state-of-the-art wood shop. I assume that you have to pay for materials, but other than that, it’s available to anyone, anytime. 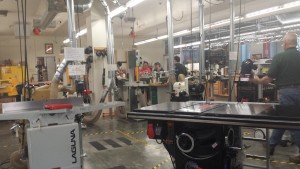 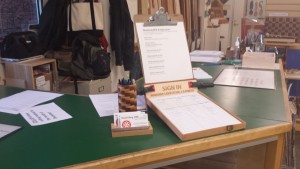 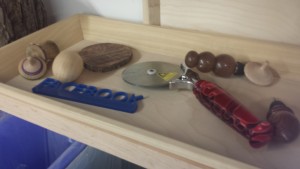 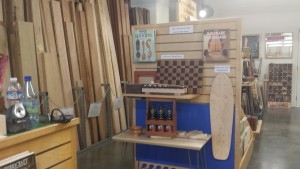 The nearby print shop also gets a lot of use: 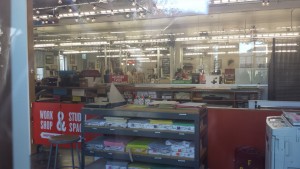 Oh … something else before I get back to my “moment.” Possibly not appropriate, but just too funny not to mention … 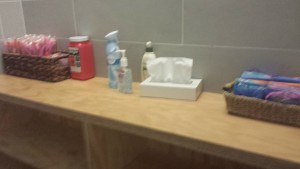 I was still laughing about that when I closed the stall door and noticed the “Weekly Push.”  No kidding! 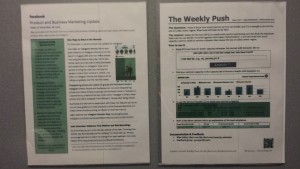 It’s the weekly company update … probably the only report that Mark Zuckerberg wants every employee to read.  What I find to be the most interesting about that is that this might be the only piece of paper that these “kids” read all day.  Everything else is on a screen. It might also be the only moment they slow down enough to really process what’s going on and reflect on their part in all of this.  For my part, however, I was in a hurry to leave, so I just took a picture because I was feeling overwhelmed by the astounding influence this company is having on the future of the world.

Ok … so back to the my “moment” – the one that felt was an ending and a beginning at the same time.

I don’t have a picture of it because even though Paul said I could take as many pictures as I wanted (as long as I didn’t stop to focus 😉 ), he said I couldn’t take this one. We had just walked past his own place in the building, the one he pointed out to me on the Smart Board when we first came in. 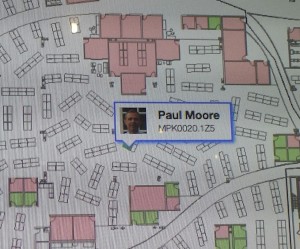 Just beyond his computer station,  he pointed out a  large glass central conference room that I hadn’t even noticed and said “there’s Mark.”

I glanced up and saw the face I’ve seen in pictures so many times before, laughing and talking to a couple of other people at the table. I later learned that one of the people was Sheryl Sandberg, Facebook’s COO and author of Lean In  and Option B.   Paul said they were probably planning the weekly Q & A that he was going to try to attend at 4:00.

What struck me the most as we were walking through this amazing complex was that although there were hundreds of people standing or sitting at computers, walking, talking and working, the energy was relaxed and calm, and the huge room was almost silent.

When I saw this 32-year-old who is running a 350 billion dollar company where the average age of his over 15,000 employees is 34 … I flashed back to another life-changing moment.  It was during the summer of 1997 when I was driving back home to teach another year of 5th grade.

I listened to  two audio-books on that trip:  Joseph Jawarski’s Synchronicity: The Inner Path of Leadership. and Daniel Goleman’s Emotional Intelligence: Why It Can Matter More than I.Q.

When the second one was over, I continued driving the last 100 miles thinking about leadership and emotional intelligence.  That’s when it dawned on me that some of the kids in my class, 10-year-olds in 1997, would be the leaders in the year 2020 – the ones I would count on long after I retired. I got very excited about that thought and began planning a leadership program at my school that I would talk to my principal about as soon as I got back.  Instead, however, through a series of unexpected synchronicities, I found myself retired from classroom teaching and living 700 miles north by the end of that year.

Four years later, in 2001, I wrote about that whole experience on a website that was anything but “user friendly.” Since I never learned how to use the software program that created the site, and couldn’t afford to pay a webmaster, it will forever remain just like I left it in 2004:

Leadership 2020: Specializing in Learning Environments for our Future Leaders.

What’s most interesting to me about this website, though, is is that if I changed the year from 2020 to 2040 – I wouldn’t write anything different today.

That brings me to the moment that changed my whole perspective.  Just after I saw Mark.  I looked around and realized that these are those 10-year-olds who were in 5th grade in 1997 …  and Mark Zuckerberg was only 12 when I left teaching!

So once again I am going to ask that same question:

The next logical question is whether or not our schools are preparing them to be the kind of leaders the world will need when I may or may not even be around to see it?   How many potential leaders are we losing because they are spending most of their waking hours preparing to take tests rather than practicing skills for success in the 21st century?  Neale Donald Walshe said that the problem with our world is that we are preparing students for “our past and not their future.” It seems to me that we need to stop and think about that for awhile …

My tour of Facebook energized me and made me realize that it’s time that educators rethink our ideas about  “school.”  Perhaps a system that was designed by the Committee of 10 in 1893 needs some major revision as we approach the second half of the 21st century.  After my tour I decided to try my hand at starting a Facebook group of my own.  To my amazement it took me less than a minute to set up!

Now that I know Facebook’s mission statement, I hope that this group will be a place where educators can connect and share ideas that will help us prepare kids for their future and not our past.

I’m still learning how to administer a group like this, but I’d love for you check it out and join me if you find it interesting 🙂 !